×
Notice
This website or its third-party tools use cookies, which are necessary to its functioning and required to achieve the purposes illustrated in the cookie policy.
If you want to know more or withdraw your consent to all or some of the cookies, please refer to the cookie policy.
By closing this banner, scrolling this page, clicking a link or continuing to browse otherwise, you agree to the use of cookies.
To accept | Read more
Portland
The whole website**

City Guide about Portland with tips and reviews by travelers. 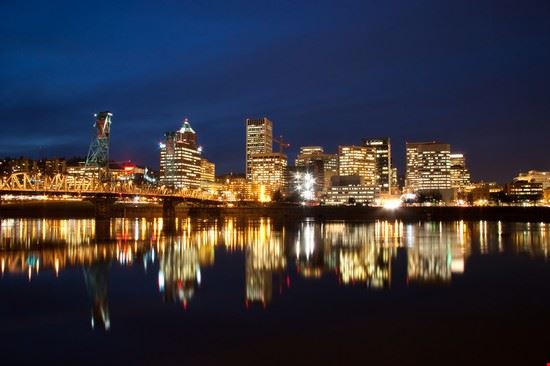 GuidePdfAppDownloadRow-GetPartialView = 0,003003
Portland, also called ‘The City of Roses’, is situated in the state of Oregon, United States. It is located at the confluence of the Willamette and Columbia rivers and has a population of approximately 575,000 inhabitants.
The city was incorporated in 1851. Its strategic location enabled the city to grow and establish itself as the principal port in the Pacific Northwest during the nineteenth century. Portland is renowned for its excellent land-use planning, public transport system as well as numerous microbreweries.
Portland lies in the Marine West Coast climate zone and is characterised by warm, dry   summers and mild, wet winters. Summer (June to September) is the best time to visit the place, as the weather generally stays peasant, with plenty of sunshine.

Overall Guide : Portland’s biggest attraction is the large number of parks in the city. These include the Forest Park, which is the largest wilderness park in the US, and the Mill Ends Park, which the world’s smallest park. The International Rose Test... more Garden, Peninsula Park Rose Garden and the annual Portland Rose Festival celebrate the city’s illustrious relationship with roses. Portland is famous as an arts destination and was named as the tenth best Big City Arts Destination in the US by American Style in 2006. Portland Art Museum is home to a dazzling art collection and Oregon Ballet Theatre, Portland Opera and Oregon Symphony are the major performing arts institutions. The important museums in the city include the Oregon Museum of Science and Industry, Portland Art Museum and the Children’s Museum. Oregon Zoo houses exotic species of birds and animals from all over the world.

Overall Guide : Portland people are really nice and friendly. The land is green and smells great. This is probably what makes its people wonderful. You get so many places to visit, including discreet Downtown, NW modern district, Powel's bookstore. You also can... more visit the natural attractions (actually rather a MUST) like Rose Graden, river Waterfront, Forest Park and much more to do there.
Not to be missed Portland Art Museum , Lloyd's Center , Pioneer Courthouse Square

Overall Guide : PORTLAND IS THE PERFECT GETAWAY IN JAMAICA, THE PEOPLE ARE AMAZING AND SUPER DOOPER FUN TO BE AROUND

Overall Guide : Its the best parish its lush green scenery its many river almost every one you meet greet you with a smile. The only problem is with water for household need a good irrigation system

Overall Guide : portland a beautiful place
Not to be missed going to theatres
IntroReviewListContainer-GetPartialView = 0,0150146