City Guide about Fraser Island with tips and reviews by travelers. 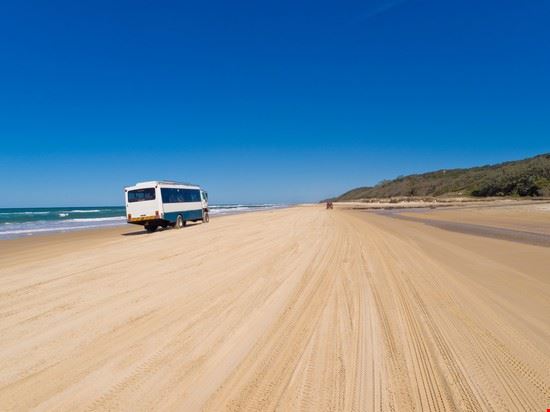 GuidePdfAppDownloadRow-GetPartialView = 0
Fraser Island (with an area of 1,800 km2) is a long island (about 120 km) located on the north-eastern coast of Australia, in front of the coast of Harvey Bay, in the state of Queensland.
Fraser Island is approximately 300 km north of Brisbane.
Fraser Island is said to be the largest sand-island all over the world; it’s listed as a World Heritage Site since 1992.
However, what makes this island unique worldwide, further than its sandy beaches and breath-taking views of the ocean, is the total lack of paved roads : the only highway on the island is actually a long beach, practicable only by 4x4 jeeps.

Overall Guide : Apart from wonderful beaches and unique landscapes, what tourists can enjoy when in Fraser Island is the plenty of activities available throughout the island, from 4x4 jeep tours across the island, up to tours of the island by plane :... more this is probably the only way to admire the whole beauty of the island.

Overall Guide : Frazer is awesome! It's a great place to visit or camp. Lots of good stuff to see & do.

Overall Guide : I loved everything about Fraser Island. Can't wait to go back
Not to be missed Eli Creek , Lake McKenzie , The Maheno Wreck