City Guide about Arles with tips and reviews by travelers. 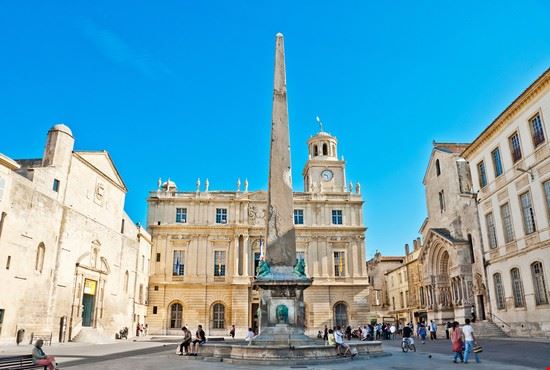 GuidePdfAppDownloadRow-GetPartialView = 0
Situated on a hill overlooking the Rhône, in the South of France is the city of Arles. With history dating back to the 6th century, this ancient city is a centre for history and culture.
Population wise, Arles has barely about 50,000 inhabitants. It enjoys a Mediterranean climate of lovely long summers and mild winters; however, it is also on the path of the mistral winds which are at their worst during spring and winter.
As it was close to the Rhône, Arles was once a part of a thriving river trade. Now however, the main economy of the people of Arles depends on agriculture chiefly rice and salt. There is a street market that takes place weekly where one can shop on the open streets.
The streets in Arles bring the medieval era into modern days as they are narrow and winding.

Overall Guide : Arles is a World Heritage Site and as such, has a lot on offer for a tourist. Some of the heritage sites are the Roman theatre and amphitheatre where bull fights are held. Arles has a very good museum of... more ancient history. The Church of St. Trophine is a fine example of Romanesque architecture. Close to Arles, one can visit the historical walled town of Aigues-Mortes or if walking is more desirable, then the town of Les Baux-de-Provence requires a lot of walking inside the town. Moreover, walking tours are conducted within the city. The people of Arles are renowned for their unique traditional costume and can be seen wearing it in public during various festivals. Arles is also the site of a famous photography festival held annually. In addition, the annual festival of Arles-sur-Tech is held on July 30 and there is a procession in honour of the patron saints.