City Guide about Heidelberg with tips and reviews by travelers. 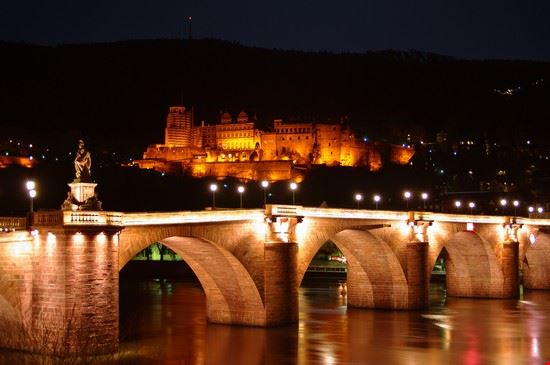 GuidePdfAppDownloadRow-GetPartialView = 0
Heidelberg, in the south-western part of Germany, is nestled in a valley along the river Neckar. This town of approximately 143,000 inhabitants attracts hordes of tourists annually owing to its medieval-styled architecture.
Overall, Heidelberg has a pleasant climate. The temperatures in winter may drop as low as 1°C; January being the coldest month. Summers are warm; July and August are a good time to visit with the average temperature at 20°C. The city sees a fair amount of rain, spread out across the year.
During the Middle Ages, Heidelberg had a tumultuous time with the castle being burnt down twice and the city being almost destroyed by war. It went through major rebuilding in the early 1900s. Surprisingly enough, Heidelberg came out of World War II almost entirely unscathed, one of the few German cities to do so.

Overall Guide : The Heidelberg Castle stands just outside the main city and is easily accessible by foot or by car. Today, this red sandstone structure is a ruin and only some parts have been restored; but it is still an impressive sight.... more The Hall of the Mirrors, the Thick Tower and the Wine Vat building stand out amongst the ruins. The Palace of Friedrich IV is one of the restored structures in the castle and houses a gallery of portraits of the rulers, a bell tower and the royal apartments. In Altstadt (old town) the main square and the town hall warrant a visit, especially during market days when the square comes alive with the vendors’ fresh produce. Heiliggeistkirche, a large Gothic church, and some old mansions and medieval houses are the other attractions. The towns of Neckarsteinhach and Hirschhorn in the Neckar valley can be easily explored by taking boat cruises on the river Neckar. They make for good day trips from Heidelberg.

Overall Guide : All the pubs are in "Unterstrasse"! Wonderful, cheap, nice music, a lot of opportunities to meet people from all over the world, nice walk on the ancient Roman bridge and along the Philosophen Weg, half-way in to nature. I highly... more recommend going!! To dance go to halle02 and Karlstor.

1
City tour along the River Neckar