City Guide about Koblenz with tips and reviews by travelers. 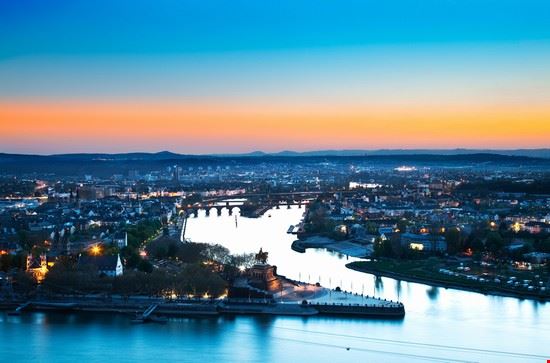 GuidePdfAppDownloadRow-GetPartialView = 0
The centre of Koblenz is separated in 2 parts, the Altstadt known as the old town, with its undersized and contracted streets, and the eighteenth century Neustadt, organized along broad boulevards. I enjoyed shopping on the street of Lohrstrasse, linking the old town and the train station. The city has a military and spiritual architecture that comprises of Ehrenbreitstein, it was originally built in thousand century, and rebuilt by the Prussians in the nineteenth century. The history says that the thirteenth century Alte Burg also known as the old castle, and the enormous eighteenth century princely palace which is known as Kurfürstliches Schloss in German. It took me thirty minutes to visit castle of Stolzenfels it was in the south direction. Koblenz's holy inheritance typically dates from the Romanesque period eleventh to thirteenth century. After reading a little bit of history I found that the most remarkable examples are the Basilika St. Kastor, the Florinskirche and the Herz-Jesu-Kirche. I alos came to know that the Liebfrauenkirche was firstly built as a Romanesque church, however afterwards integrated various Gothic and Baroque essentials. A good to know information which I found was the famous fourteenth century Baldwin Bridge on the Moselle is the oldest bridge in the province. The Moselle meets the Rhine at the German Corner known as Deutsches Eck in German, which is situated at the foot of the citadel, where the previous center of operations of the Teutonic Knights was situated. A massive sculpture of Kaiser Wilhelm has been placed there since 1897. The amazing and huge Neo-Romanesque Prussian Government Building …Preußisches Regierungsgebäude… along the Rhine. I sat in the cable car which took me along the Rhine from the Deutsches Eck .I truthfully enjoyed the cable car trip with an astonishing sight over Koblenz. The day we went to see the Fortress we came to know that it was being used for a farming show, so instead of going into the fortress we walked more or less in grounds to the see Koblenz from the top. After that we visited the German museum Festung Ehrenbreitstein. What a place I must say… even if you do not know the language you can work a lot. When we went on the top of the museum I was surprised to see that there was a beer garden and cubicle hut and the view from there over the Mosel and Rhine rivers is absolutely dazzling. The cable car ride was economical. The distance between the cable car ride and the museum was pretty short; however it was worth watching Deutsches Eck. Too historical… in fact I was quite stunned at how gigantic the statue of the man on the horse was. The size was so big that I felt I was a tiny little person standing in front of a huge giant. I also attended a marvelous beer festival which was going on in the park while, we had a great fun. If you are fond of war related stories I strictly recommend you to go to Wehrtechnische Studiensammlung museum it has vast gathering of recent and historical weapon, right from planes and tanks to coding equipment, the museum has everything which is used by the military. I would give eight out of ten for this place. This place is surely for the history lovers.
CommonInfoPlaceIntro-GetPartialView = 0,0468733
AdvValica-GetPartialView = 0
CommonPluginEuropeAssistence-GetPartialView = 0