City Guide about Athens with tips and reviews by travelers. 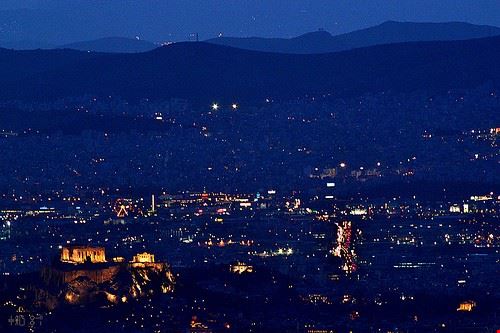 GuidePdfAppDownloadRow-GetPartialView = 0
The chronicle will take you from the Neolithic period, where according to the archeological findings it is estimated that the first organizing attempts of the city were made, at Pelasgous, by the first habitants which on 1400 b.c. began fortifying Acropolis mountain with walls, to the age of Copper and 800b.c, when the final union of Athens into an integrated country took place, and there, for the first time, we find the Panathinaia, the leading fest of Athens in honor of god Athina.

The “journey” continues with reference to the last king of Athens, Kodro (1068 b.c), according to the valuable information of one of the most significant philosophers of all times, Aristotle, moves on to the four tribes the Athenian population was divided into in the 8th -7th century and to 636 b.c, when Cylon, taking advantage of the farmers disappointment, unsuccessfully tried to take over the tyranny with a coop, the well-known “Cylonian Agos”.

In 624 b.c you will precisely understand what the legislation of Draconta consists of, in 594 b.c how the opposing parties of the inhabitants and the wealthy of the time, commonly chose Solon to govern, the tyranny of Pisistratos in the mid 6th century b.c, the assassination of Hipparxos in 514 b.c, the significant alterations made by Klisthenis in 508 b.c which build the grounds for The Athenian Democracy.

The Chronicle describes the memory of the Persian king, in 500 b.c, when Athens sent help to the rebelling cities of Ionia.
The Athenian courage in the battles of Marathon in 490 b.c and in Artemisio in 480b.c, the appearance of the leading role of Athens in 478 b.c, the well-known victory of Eurimedonda that contributed to the liberation of all the greek cities from the Persian domination.
The “gold century” of the Athenian Democracy unfolds before you in the 5th century b.c, a while after Periklis (490-429 b.c) took charge of the Democratic Party and the First Peloponnesian War came to an end.

Then the Acropolis monuments were built.

An era in which, if you lived you would get the chance to meet Socrates, the Sophists, and the three great men, for whom you crowd together at the cashier office of the Athens Festival every summer, as well as the Ancient theatre in Epidauros in order to enjoy one of their plays.

The Chronicle continues with the conclusion of the unique spiritual and artistic flourish of Athens, because of the Second Peloponnesian War (431-421b.c and 416-404b.c), the humiliating Athenian defeat in Sicily by the Lakedemonians, the prosperous period of the Macedonian Dynasty, the Russian domination, during which upon Adriano (117-138b.c) the temple of Olympian Zeus was completed, the currently preserved aquarium was constructed and the Library was built.

An important halt is the year 53b.c, when Apostle Paul educated Christan norms to the Areio Pago, before Stoic and Epicurean philosophers, 396b.c was a terrible period as Athens fell into the hands of Gothic intruders.

The uprising of Ioustiniano (482-565) to the empire throne played an important role in the avoidance of the ancient Greek world, but also from the era of the Emperor Hrakleio (574-640) a long period of obscurity and predatory attacks began for Athens.

In 1204 the Crusades entered the Acropolis fort.

The Frank occupation was maintained up until 1308, while the Catalanic Company up until 1387.
Following Constantinople's fortune, Athens was occupied in 1456,

The era of the Turkish occupation is described in 14 journeys.

In the beginning of the 19th century the Chronicle reminds us that in 1800 when Lord Elgin situated himself as an ambassador in Constantinople, invoking on the disasters of the ancient Athenian monuments, violently took away parts of the interior decoration of the temples on the Acropolis Mountain.

In 1834 we see how Athens is declared to be the capital of Greece, by an order from the Regency and a year after the first public elections took place which resulted in Anargyro Petrakis being elected as mayor.

In 1843 we discover the secrete councils in the house of a significant Greek, Makrigiannis, the great civil and Athenian guard revolution, which lead to the grant of a Constitution.

In 1862 we observe the abolishment of Othons kingdom.

A year later, we see his succession by George the First.

In 1882 and for 15 following years we observe the domination of the leading personality of Harilaos Trikoupis.

In 1896 we detect the revival of the Olympic Games in Athens.

In the period of 1899-1908 we see the developments made in Athens by the Athenian Mayor Spyros Merkouris.

Information on the activities of the greatest political personality of the 20th century Eleutherios Venizelos, whose project, outstanding accomplishments in our national completion and internal achievements as a country, are visible, as the light that surrounds us and are included in the specifics of the modern period.

We move on to the period of the internal war, where an English Company resumed the activity of producing electric energy in the entire capital area.

The telephones that operated through a phone centre were replaced by automatic telephones.

In 1928 the first political airport was created in the Delta Falirou area and the airport in the Hellinikon area was founded in 1934.

You can also see the dictatorship imposition in 1936 by Ioannis Metaxas, the Second World War, the period of occupation and the political journey that lead to the “Decembriana” and the Varkiza agreemen, the dictatorship of April 21st 1967, the student and civil riot in 1973, the meta-political era up until September 6th 1997, when the International Olympic Games Committee entrusted the Olympic Games of 2004 to Athens.

Overall Guide : Acropolis, which was the original location of the walled city, is definitely worth a visit. Even today, the examples of architecture from the classical era can be found. The climb to the top of the Acropolis is steep, but is... more well worth the view of the entire city spread below. Another important attraction is Greece’s most famous temple, the Parthenon; although it is not completely restored, it still manages to impress its visitors. The Temple of Athena Nike and the Tomb of Erechtheus are other attractions. The Acropolis Museum houses the sculptures from the Pantheon amongst other things, and the Benaki Museum displays an extensive collection of Greek art. The National Archaeological Museum has a very rich display of findings in the last few centuries. There are several places to be explored in the Attica plains surrounding the city. The Monastery at Kaisariani and the Temple of Poseidon at Sounion warrant a visit.

Overall Guide : Stay near the central area -syntagma where quite a few budget hotels are available. I stayed at the golden city hotel which was real value for money. use the metro - well spread out - for transportation to move about... more and also airport, Piraeus port etc. there are Indian Restaurants. tourism is flourishing in Greece with a lot of inputs for tourists available at the hotel itself and hotel staff esp in the hotel where i stayed were very helpful.
Not to be missed National Garden , acropolis of athens

Overall Guide : Plaka, the old village under Acropolis hill. With narrow streets and full of small bars, cafe, restaurants. Try www.yiasemi.gr. Food from 5€, a fantastic small restaurant where all like a family.... Real food like my mother used to cook... Handmade... more sweets. Greek Style.
Not to be missed Parthenon and Acropolis , The History of Gazi , Monastiraki square

Overall Guide : Great history, open-hearted people, nice nature and really-really exciting entertainment, with dancing and singing. Also in summer there is a wonderful sun and sunny beaches to enjoy. Do not miss Acropolis and monastiraki, and if you can visit lycabettus hill... more at night or the greek island santorini, the remaining part of ancient Atlantis. I have been in Athens twice and a had both of the times my best vacation.
Not to be missed National Garden , phillipapou and the hill of pnyx

Overall Guide : A really nice place, whether you are with family or friends. It is quiet and the people are very nice, polite and helpful. Athens has some very important sties which figure in Roman / Greek history, so I highly recommend... more a visit. Don't miss this opportunity, for us Italians, it feels like home.

Overall Guide : Athens is a very nice city with a lot of things to do from day until late night, walks, coffee, Archaelogical sighs, a lot of food greek and international and many pubs, bars that close very late until the other... more morning.
Not to be missed Plaka , acropolis of athens , Parthenon

Overall Guide : I like the chaos and have little trouble getting by. But the safest areas are also the most expensive.
Not to be missed acropolis of athens , Monastiraki , National Archaeological Museum

Overall Guide : It is very interesting