City Guide about Bologna with tips and reviews by travelers. 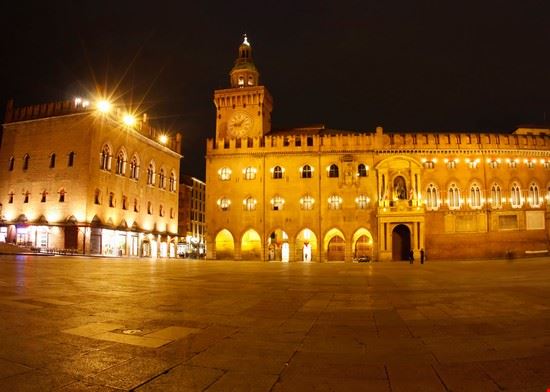 GuidePdfAppDownloadRow-GetPartialView = 0,0156253
Bologna is located in the northern part of Italy. This city of approximately 374,000 inhabitants, though small, is one of Italy’s premier cultural and commercial hubs.
The university built here in the Middle Ages is still functioning and presently caters to almost 100,000 students. It is the oldest existing university in Europe and has earned the city the title of ‘the learned one’.
Spring and early part of autumn are the best times to visit Bologna. July and August are too hot with temperatures averaging around 30°C. Winters can get bitterly cold with occasional snowfall.
The initial tourists began visiting Bologna primarily because it was a convenient stopover between Florence and Venice; however, of late, the city has been attracting tourists purely on the merit of its rich history and well-preserved architecture.

Overall Guide : The city has a common thread running through its construction; almost all buildings have a red roof which lends it a harmonious look. The Archaeological Museum is housed in an old hospital and has on display examples of excavations from... more ancient civilisations all over the world. The Piazza Maggiore, the main square of the old town, is characterised by various Renaissance-style structures around it; the most notable one being the city hall, Palazzo Comunale. The leaning towers of the Asinelli and the Garisenda are the two still standing from the dozen that existed in the Middle Ages. Asinelli is accessible to the public and gives a panoramic view of the red roofed city from the top. The Church of Santo Stefano is a unique structure of four churches linked to each other. While in Bologna, experience the wine tasting tours in the surrounding countryside and try the typical cuisine of the region, often called the gastronomical capital of Italy.

Overall Guide : Famously known as Birth place of world’s oldest university named as, University of Bologna, in the heart of Emilia-Romagna region in the Northern Italy one can find the historical City of Bologna. It is one of the oldest cities in... more the world. The early settlers of this place were the Etruscans and the Celts. One can witness stupendous historic sites which attracts many tourists from all over the world. When we talk about the culture then this place is known for its vibrant culture hosting many festivals like International Comic festival, Human Rights Film Festivals, Live Arts Week etc. One can enjoy delicious Italian cuisine in this part of the world, specialty of this place in terms of cuisine is Tagliatelle one can have this dish with meat sauce. With rich cultural heritage and historical background this city unfolds many aspects of life which are not known to the outside world. With a lot of things to see and experience one should visit this city.
Not to be missed Santa Maria della Vita , Sanctuary of Madonna di San Luca , Piazza Maggiore
IntroReviewListContainer-GetPartialView = 0,0156254
AdvValica-GetPartialView = 0
AdvValica-GetPartialView = 0