City Guide about Florence with tips and reviews by travelers. 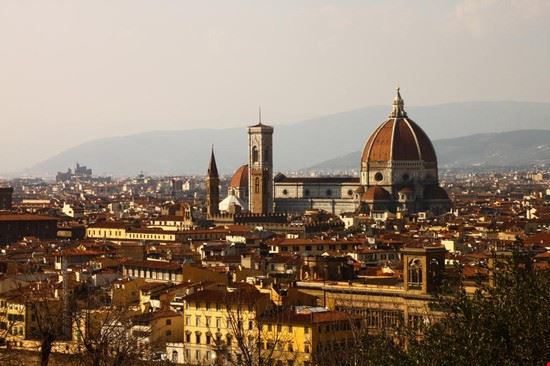 GuidePdfAppDownloadRow-GetPartialView = 0
Florence, in the Tuscany region of Italy, is home to approximately 366,000 inhabitants. Having been home to the likes of Leonardo Da Vinci, Machiavelli and Michelangelo among others, it has earned the title of ‘the Renaissance capital of the World’.
Florence has a temperate continental climate. Summers are hot and dry with the average temperature in July and August at 31°C.  Early spring is the most pleasant time of the year.
Historically, Florence was along an important route between Rome and the northern part of the country and an important centre of art and culture especially in the Middle Ages.
Its location is Tuscany, a premier wine-growing area in the world, makes the wine industry an important part of the city’s economics. Tourism is the other mainstay of the economy.

Overall Guide : The Santa Maria del Fiore, popularly known as Il Duomo because of its huge wooden dome, is one of the largest cathedrals in Europe. The Baptistery of St. John with its intricate mosaic floors and ceiling and the bell tower... more are a part of the main cathedral. The several piazzas are typical of Florence. The Piazza della Republica, the original medieval town centre, and the Piazza Signoria, the location of several museums and galleries, are the most important ones. The Ponte Vecchio is a unique stone bridge with shops hanging on to its edge with the help of stilts. The hill of Piazzale Michelangelo is the site of the famed green and white basilica of San Miniato al Monte and an ideal point for a view of the entire city. Florence is an ideal base to explore the rest of Tuscany, especially the wine region of Chianti. For an offbeat experience try the hot air balloon ride over the vineyards of Tuscany followed by a champagne breakfast.

Overall Guide : Do not miss the Ponte Vecchio with its jewelery: although most of it is to look at but not to touch, it's fascinating. What can I say the Uffizi, the Pitti Palace, the Cathedral and Santa Maria Novella? For those... more who don't love art, they don't need to worry, Florence is also full of science and nature museums, seeing is believing.

Overall Guide : FLORENCE IS A VERY BEAUTIFUL CITY, YOU NEED AT LEAST 2 DAYS TO SEE IT PROPERLY. IF YOU WANT TO GO TO THE UFFIZI, YOU SHOULD BOOK AHEAD IN ORDER TO AVOID HOURS OF QUEUING TO GET IN. YOU HAVE... more TO TRY A FLORENTINE STEAK AND A LAMPREY SANDWICH, SOLD BY STREET VENDORS ...

Overall Guide : The whole city is wonderful, I recommend the view from San Miniato al Monte, you can see the whole city, it is a view to die for. The Boboli Gardens are worth visiting,. Also enjoy a wonderful "fiorentina", there is... more a wide price range, you eat well in "trattorie" and the prices are right.

Overall Guide : It is nice to study the Italian language and to combine it with touring eating and so on.
Not to be missed Places to eat , Santa Maria Novella , Study italian