City Guide about Merida with tips and reviews by travelers. 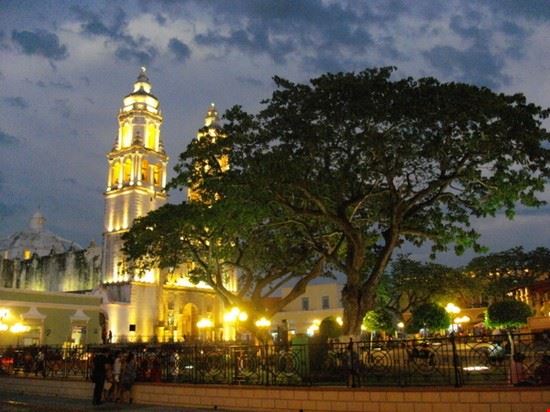 GuidePdfAppDownloadRow-GetPartialView = 0
Merida is the capital of the state of Yucatan in Mexico. This traditional city is also known as the ‘White City’, owing to the use of white paint and white limestone in its structures, depicting the brilliance of the city. It has a population of about 800,000 occupants.
Merida experiences a warm to hot humid climate with rainfall during the months of June and August. Summers can get really hot, tempered by the occasional breeze. Situated close to the sea level, Merida has a flat topography.
Fransisco De Montejo discovered Merida in 1542. A defence city in ancient times, modern Merida goes beyond the old city walls. However, the European-style houses, which are a legacy of the old times, still exist.

Overall Guide : Merida offers everything from recreation to splendid architecture. It has a host of art galleries and eminent shopping places for the tourists. Casa Montejo is an excellent remnant of Merida’s colonial architecture and is visually appealing. The Cathedral is another place known... more for the murals outlining the rich heritage of the city. Also, there is an exquisite library called the Merida English Library, which has a wide collection of books and videos for all ages. The Carnaval is an event not to be missed; during this event, the city is filled with music, dancing and many parades. With Merida being among the few cities that participates in the Carnaval, it is celebrated in a grand fashion.

Overall Guide : Hotel Zamna, Santiago. Centro. Great little Hotel. Fantastic Breakfasts and each month they do a great theme night with a wonderful Dinner for $150 pesos. Los Vegas on Calle 63 for great Mexican food at good prices. $125 pesos Bus tour... more around Merida. a must do. Entertainment on every night free in Merida. Sunday there is a huge market in the main square where you can also buy some great crafts from all over the state. Local buses are cheap and safe.
Not to be missed Uxmal , Montejo , Anthropology museum

Overall Guide : Merida is an enjoyable, educational, energetic and safe place to visit and live. It can be very hot the last part of April, all of May and the beginning of June before the rainy season begins. "Rainy season" is a... more little less hot, temperature-wise, and the rains usually pass quickly. Merida is one of the safest cities in Mexico. The Mayan influence is everywhere, which makes the area special.
Not to be missed Mayan Ruins , Cenotes , Plaza Grande on Sundays