×
Notice
This website or its third-party tools use cookies, which are necessary to its functioning and required to achieve the purposes illustrated in the cookie policy.
If you want to know more or withdraw your consent to all or some of the cookies, please refer to the cookie policy.
By closing this banner, scrolling this page, clicking a link or continuing to browse otherwise, you agree to the use of cookies.
To accept | Read more
Sitges
The whole website**

City Guide about Sitges with tips and reviews by travelers. 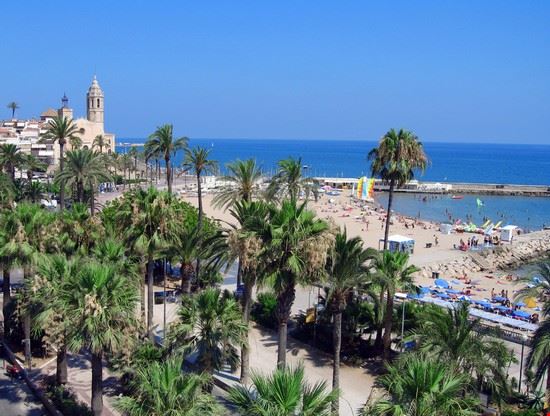 GuidePdfAppDownloadRow-GetPartialView = 0,003003
Sitges can be described as a petit city located in Catalan, Catalonia, Spain. It’s situated at a distance of 35 Km on the southwestern side of Barcelona. Between the sea and hills, it’s known for nightspots, historical sites, and much-frequented beaches.

While roots of artsy reputation of Sitges would take one back to late nineteenth century, the period between 1960 and 1970 was marked as evolution of aesthetic Sitges. This recognition can be credited to Santiago Rusinol, who went on to come and stay over here at the time of summer. Sitges also came to be known as ‘Ibiza in miniature’. Today this place can be regarded as one of the dynamic cultural oases; as its economy is based on culture and tourism.

This can be evident from the fact that Sitges offers around 4500 hotel-beds, that too with 50% of them within 4-star hotels. The most interesting fact about Sitges is that it’s a ‘gay tourist town’ as well. In July-August, lesbians and gay men pay visits to Sitges as ‘one of the most popular gay holiday spots in Europe’.

Sitges enjoys the reputation of having nearly 300 days/year.

Early autumn and late spring would prove to be the best period to visit Sitges.

Overall Guide : Cau Ferrat Museum Cau Ferrat Museum goes on to offer its visitors a diverse collection of artifacts, inclusive of numerous sculptures and paintings. Within its walls it’s possible to have a glance at works by Rusinol and Picasso,... more amongst several others. The fact that the property in which this museum has been housed was owned by Rusinol cannot be ignored. He had purchased it for showing his works; especially those belonging to Barcelona. Maricel Museum Portion of former residence of Charles Deering and a small construction which had been residence of Ramon Casas (a painter) form the ‘Maricel Museum’. In the year 1970, Dr. Jesus Perez Rosales went on to donate art collection to this city. Then its transformation into ‘Maricel Museum’ took place.  It got modernized by Miguel Utrillo, an artist. It houses sculptures and paintings from nineteenth and twentieth century’s. Opening Hours This museum remains open only during the summer season from 9:30 to 14:00 and from 17:00 to 19:00.

Overall Guide : Fantastic tapas and bars, explore the little bars away from the main street, bar baron and el cable are particularly friendly and good value bars (both food and drink).
Not to be missed The beaches