City Guide about Barcelona with tips and reviews by travelers. 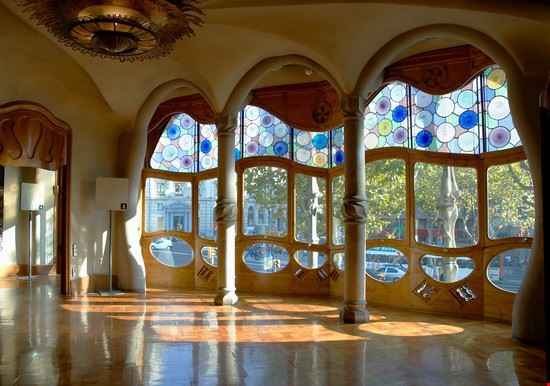 GuidePdfAppDownloadRow-GetPartialView = 0
Barcelona is a modern and cosmopolitan city. Located in a privileged position on the coast of the Iberian peninsula, it is the second largest city in Spain.
This city enjoys a prime location, bathed by the sea, between the Mediterranean Sea and Europe. Today almost 4.5 million people live in the Barcelona metropolitan area.
Barcelona is tipically a Mediterranean city, not only for its geographic location, but also above all because of its old history and cultural influences. There are two official languages spoken in Barcelona: “Catalan”, generally spoken in all of Catalonia, and “Castillian Spanish”.
Barcelona is located along the Mediterranean coast and it is 160 Km. south of the Pyreenes mountain range. The city is located on an altitude of 4 mt. above sea level.
The area around Barcelona has a wealth of attractions including the laid back resort towns of the Costa Brava north of Barcelona towards the French border.
You can have spectacular views over the city and the coast line from the mountain of Tibidabo (512 metres in altitude) is, the highest point of the Collserola hills, rising between the passes of Vallvidrera and Serola and it amusement park.
Barcelona is certainly economically most active city in Spain. The city has an old history, and there are monuments of Romanesque, Gothic, Renaissance and earlier periods.
Is also a city of much Modernist architecture: the most popular spanish architect being the former resident Antonì Gaudì.
Gaudì was one of the most important modernist style architects worldwide. Many of his most extraordinary works are to be found in Barcelona.
Barcelona is, one of the nicest city in the world, is a dynamic and stylish city. In this city you can have so much to see and do.
There are a lot of interesting museums, art galleries, (with significant collections by Picasso and Miró), theatres, and restaurant where you can taste typical spanish dishes.
The city offers some of the trendiest nightclubs and discos; there are six beaches in Barcelona, with 4,2 Km.of length.. They have all the facilities and services necessary for people to enjoy a pleasant and safe day at the beach.

Overall Guide : The combination of tourists and business travellers visiting Barcelona means hotels are busy for most of the year. Spring and early summer is the best time to be in the city. The weather is usually pleasant, the number of tourists... more manageable and the city humming. Maybe autumn is the perfect time to visit Barcelona with less heat, fewer tourists and the city’s biggest street party, “Festes de la Mercè”, on September 24. The best place to start visit Barcelona is “Las Ramblas”, a pedestrian street with dozen of outdoor cafès; here you can watch people go by, stroll, or simply relax. “Las Ramblas”, is a boulevard of about 2 kilometers in length, between Plaza de Catalunya and the port. You will find people of any age, shoe shine boys, small stands selling flowers and vegetables, street theater, big businesses, galleries, cafeterias, terraces as well as some of the best theater of the city. While there you must visit the “Barrio Gòtico”, in the gothic quarter, one of the oldest and most interesting parts of Barcelona. At the square of “Placa Nova” you can see the “Palacio de la Generalitat”, and “Palacio del Ayuntamiento” (town hall). At “Plaza del Rei”, there are the “Palacio Real Mayor” and the wonderful “Gothic Cathedral”: built between 1298 and 1450, the facade and the cupola, with a height of 90 meters, are impressive works from the 19th century. The best known monuments in the city, are the great cathedral “Sagrada Familia”, “Parc Gϋell” and “Palau Gϋell”, all created by the brilliant architect Antonì Gaudì. Among the best-known recipes for which Barcelona is famed, are their well known stews, like “la escudella i carn d'olla”, made of vegetables, rice, noodles and potatoes. Fish specialities in Barcelona consist of "Zarzuela", a dish of the same name like the Spanish operetta and made of cuttlefish, mussels and prawn. Typical desserts are “Crema Catalana”, and the “Postre del Musico” ("dessert of the musician"). Barcelona enjoys a Mediterranean climate, with mild, cool winters and warm summers.

Overall Guide : I recommend that you stay close to Las Ramblas as the city area is alive with street theatre, good eating places and plenty of shops. There is lots to see within walking distance and places are not hard to find.... more Make sure that you see some of Gaudi's work. It is stunning. He was a man ahead of his time. Using local taxis we found was as cheap as buying a bus ticket.

Overall Guide : It was really pretty enjoyable and really good in being able to sight see there was a lot of beautiful places to see and to take pictures in. I will never forget Barcelona the buildings of how tall and beautiful... more with all these different designs in it that just leave you mouth open. i also like how the hotels have so many pretty bathrooms.
Not to be missed Barrio Gotico , Palau de la Musica Catalana , Cathedral of Santa Eulalia

Overall Guide : The zoo is great, and so is the food and attractions but the air carts are amazing to go on. Not the best if scared of heights but mind blowing other wise. I loved there language and cloths and there... more amazing hotels. Also i tought there pictures were great to. A must go to place.
Not to be missed air carts , zoo , Restaurante Can Solé

Overall Guide : It's a wonderful city, full of excitement and optimism, vital and at times euphoric, as well as colourful, open and dynamic. Walking through its streets you can breathe art, restless youth, joy of living. It's a very significant destination among... more all places I've been too ... a place where you could choose to live.

Overall Guide : Don't trust people on las ramblas. They offer you special deals to get into the bars, such as four tickets for the price of one + 2 drinks etc etc. ... Instead, go for the bars where they tell you... more the price straight. After dinner, take the subway or the bus (avoid taxis at night) towards porto olimpico or razzmatazz.

Overall Guide : Hi there! I can advice you from my personal experience to use the service of rent scooter. It's truely convenient to have you own transport and ride everywhere you like visiting that city.

Overall Guide : A modern, bustling city with a glorious and troubled past. Don't miss the Santa Caterina Market, the Cathedral of Santa Maria del Mar Palace of Catalan Music Museum and the MACBA. The Sardana dancing dancing in front of the Cathedral... more of La Seu is beautiful.