City Guide about Virginia Beach with tips and reviews by travelers. 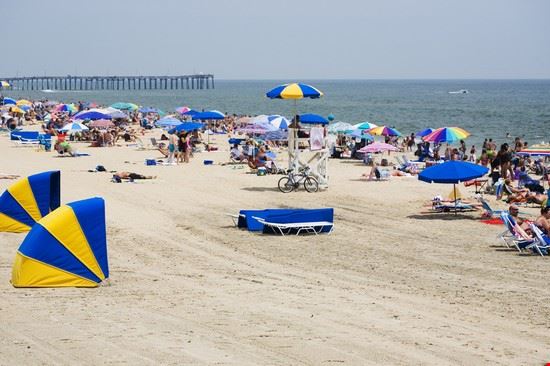 GuidePdfAppDownloadRow-GetPartialView = 0
The city of Virginia Beach is situated in the south-eastern region of Hampton Roads in the state of Virginia, USA. With an area of 1,288 sq km and a population of around 462,000, it is the largest city in the state.
The climate of the city is influenced by the Atlantic Ocean in the east and the Chesapeake Bay in the north. Summers are hot and humid with temperatures ranging from 30°C to 21°C. Winters can get very cold with temperatures ranging from 8°C to –1°C.
The first documented European explorer to set foot on Virginia Beach was Captain John Smith who arrived in 1607. The event is commemorated by the Cape Henry Memorial and Lighthouse.
The city is centred on the beach; the long coastline attracts students during Spring Break and swimmers and boaters throughout the year. The Virginia Marine Science Museum is one of Virginia Beach’s top attractions

Overall Guide : As the name suggests, Virginia Beach is a beach city of Virginia State. Visitors come here to have a great time on the shores of the Atlantic Ocean and the Chesapeake Bay. This delightful beach is the longest in the... more whole world. Therefore, Virginia Beach city is also included in the Guinness Book of World Records. Visitors can see the bridge tunnel here, which is the longest in the world. Apart from this the city also comprises of some of the most interesting spots as well. The 1881 built Cape Henry Lighthouse is a 165 ft tall tower. People visit this place to enjoy the beach front. The Old Station of Coast Guard is a historical site. On paying nominal entry fees, one can see the historical collection in this coastal guard station. The best part on the beach front is the Amusement Park. This place filled with fun activities for the entire family. One can see the astonishing views of the widely stretched beach front and the blue waters of the ocean. Visitors can enjoy swimming in the ocean while watching the dolphins leaping just few yards away.

Overall Guide : Beautiful beach around the corner. Coming from Connecticut, nice warm climates(like Virginia) is a must for people. The people are friendly and helpful. I cannot think of a single flaw.
Not to be missed Rent a bike , The beach, obviously. , local restaurants are a must.

Overall Guide : I love Virginia beach! Very beautiful and always something going on around the corner! Full of excitement and great memories waiting here.