City Guide about Hue with tips and reviews by travelers. 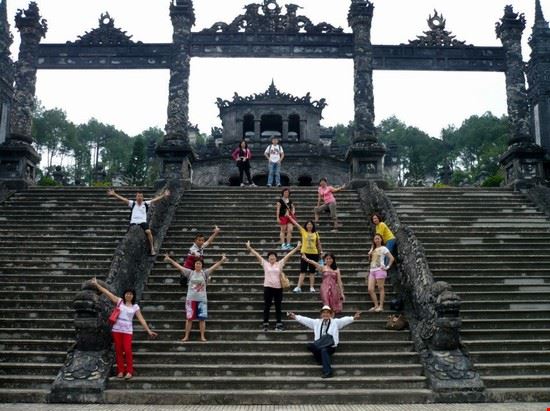 GuidePdfAppDownloadRow-GetPartialView = 0
Hue is the capital city of Thua Thein-Hue Province. Located in central Vietnam on the banks of the Song Huong, it is known world over for its monuments and architecture. Hue has a population of around 340,000 inhabitants.
Hue has a tropical monsoon climate, and hence, it is always wet. It has four seasons: spring, summer, autumn and winter.
Historically, the city of Hue was the capital of the Nguyen Lords, a feudal dynasty which dominated Southern Vietnam. During the Battle of Hue, the city suffered considerable damage. After the war, many of Hue’s historical sites were destroyed.
Hue, included on the UNESCO list as a World Heritage Site, is home to more than three hundred architectural works that are of great significance to Hue culture. Handicrafts, jewellery, bronze casting and embroidery are the elements of Hue culture.
CommonInfoPlaceIntro-GetPartialView = 0,0156262
AdvValica-GetPartialView = 0
CommonPluginEuropeAssistence-GetPartialView = 0

Overall Guide : Hue in Vietnam is an ancient place and shows lot of ancient memories. This is a unique place with ancient structures all over with amazing nature. Out of all the historical buildings, “Royal Tombs” has special importance. This kingdom is... more famous for its ‘gay’ king. These tombs give the detailed study of how the people of that time used to manage everything. With the little damage to the structures it’s still standing like a king. There is a lake inside where you can enjoy boating. The next attraction to enjoy is “Perfume River”. Boating through the river is an amazing experience especially at night as it seems like sky changing its color. Apart from this “Bach Ma National Park” is a best place to spend a day. The best season to visit is autumn. You can spend a quality time with your family. With friends, there are lots of options for hiking as well.
Not to be missed Truong Tien Bridge , Forbidden Purple City , Tomb of Tu Duc
IntroReviewListContainer-GetPartialView = 0