City Guide about Grenoble with tips and reviews by travelers. 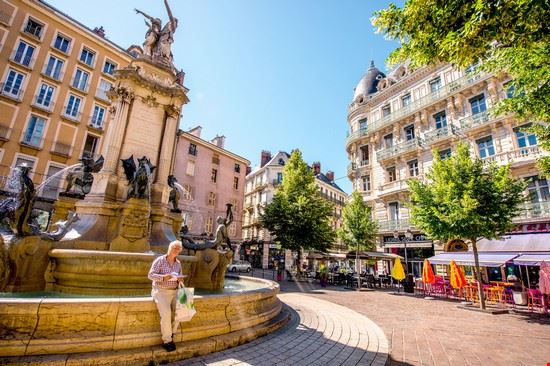 GuidePdfAppDownloadRow-GetPartialView = 0
Grenoble, in the south-east of France, is nestled between the three mountain ranges of the Alps, giving it the title of ‘the capital of the Alps’. This city of approximately 157,000 inhabitants has a student population of almost 50,000.
The climate of Grenoble is largely influenced by the surrounding mountain ranges. Winters are very cold, with the average temperature at 2°C and a good amount of snowfall. Summers are warm with the average temperature 20°C. But, it is also still, as the surrounding mountain ranges stop the wind.
Grenoble was a well-fortified city in its early days. The city is believed to have taken the first step of the French revolution by a local revolt, known as the ‘Day of the Tiles’. Today, pollution is the city’s biggest enemy with many chemical and paper industries and nuclear testing centres.

Overall Guide : The Bastille, a section of the old fortified wall, is spread over the surrounding mountain; getting there is quite a hike. However, it can also be reached by Les Bulles, the cable-car, which offers a spectacular view of the city. Musee... more de Grenoble, an art museum, houses the paintings of renowned masters like Picasso and Matisse. Sculptures and other artefacts from the Greek, Roman and Egyptian times are also displayed here. Musee Dauphinois showcases the lifestyle of the people when the city was under the reign of the counts of Vienna. The well-planned gardens and the museum’s ornate chapel make it a worthwhile visit. For nature lovers, there are many routes for climbing and hiking in the nearby area. Robert Lake and Achard Lake are popular spots in summers. In winters, Grenoble turns into a sports centre, especially for skiing enthusiasts.

4
Museum of the Old Bishopric
3 Votes