City Guide about Erice with tips and reviews by travelers. 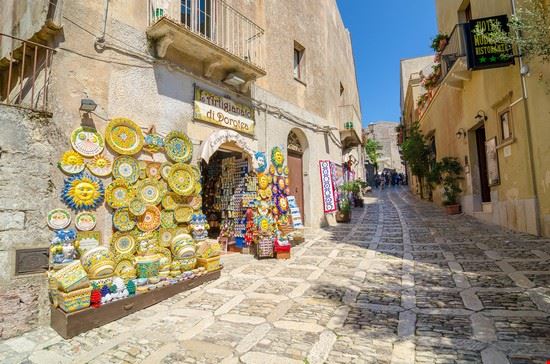 GuidePdfAppDownloadRow-GetPartialView = 0
Erice, a historic town in the Province of Trapani, is located in Sicily, Italy. Located on the top of Mount Erice, the town overlooks the city of Trapani and the north-western coast of Sicily. The city has a total population of around 30,000 inhabitants.
With a typical Mediterranean climate, this town is shaped like an equilateral triangle; it is quite hot during the summer months and pleasant during winters. Any time is suitable for a visit here.
Erice, a former important Elimi city, was initially known as Eryx, named after the Greek mythical hero, Eryx.  Following the defeat of the town at the hands of the Carthaginians in the First Punic War, its significance gradually declined.
Tourism is an important source of economy in Erice.

Overall Guide : Owing to its rich history and cultural heritage, the town, with its historical sites and monuments, is a highly popular location. The town houses a number of important structures that boast of fine architecture, the most popular being the Cathedral,... more Venus Castle and Pepoli Castle. The city also houses medieval churches like the original Orthodox Church of Saint John the Baptist, Church of Saint Ursula and Church of Saint Madonna. The city still preserves a thick boundary wall, built during the Punic times. The city is also home to the Cordici Civic Museum, situated in Piazza Umberto I. The museum contains a number of ancient Greek, Roman, Carthaginian and Phoenician remains. Owing to its rich history and culture, the town hosts a number of important events and festivals. Some of the festivals include the Festival of Medieval and Renaissance Music and the annual traditional Music Festival.

Overall Guide : Serenity, cleanliness, exceptional, though austere, beauty and sensational vistas...all these describe Erice. The city park, at the top of the town, is as lovely as any I can think of and the views make it even more beautiful. There are... more several good accommodation options and good restaurants (especially Monte San Giuliano), and Maria Grammatico's famous pastry shop cannot be missed.
Not to be missed Norman castle & the Balio , Punic walls , Duomo

Overall Guide : It's a beautiful town. The magnificent cathedral, the walls of Erice, the cobbled streets, beautiful churches, the Castle of Venus, the gorgeous scenery on all sides and the unmissable and inspirational sunsets make a visit to this village unmissable, it's... more one of the most beautiful in the world.