City Guide about Naples with tips and reviews by travelers. 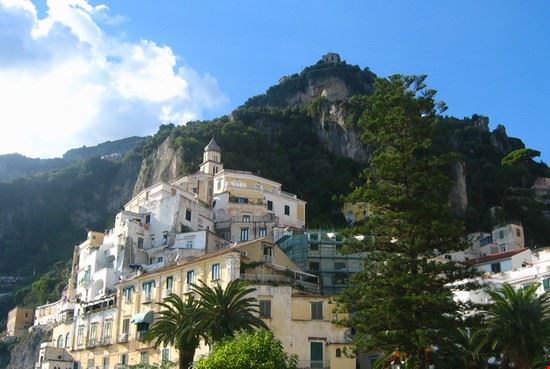 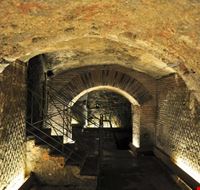 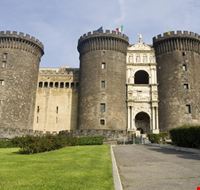 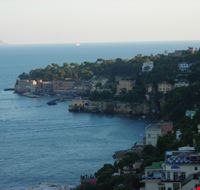 GuidePdfAppDownloadRow-GetPartialView = 0,0156258
Naples, capital of the province and the region Campania, is the third most populated city in Italy (after Rome and Milan) with over a million inhabitants and is the most important industrial centre and trading port for the South part of the country.
The city is located the Bay of Naples (an arm of the Tyrrhenian Sea), between the impressive volcano Vesuvius and the Phlegrean Fields and it enjoys a wonderful Mediterranean climate. The bay of Naples extends from Cape Misena in the north to the Sorrento peninsula in the south and is completely covered with towns and villas. Near its entrance are the beautiful and very popular islands of Capri, Ischia, and Procida.
Naples is a city with a long and sometimes chaotic history: according to the myth, it was founded by the mermaid Parthenope, who washed up on a rock here, heartbroken after failing to charm Odysseus.
The first inhabitants of the area were the Aegean Greek sailors who arrived around 470 BC. Since then, Naples has known Romans, Normans, Saracens, Angevins, Napoleonic French and Bourbon Spanish. All of them left their own mark on the city’s art, architecture, local dialect, cuisine and way of life.
Especially the Neapolitan cuisine is famous worldwide and amazingly rich with extraordinary dishes: mozzarella, spaghetti and pizza, are really the best you can taste anywhere. More particular are the "timballo di maccheroni" (macaroni cooked in a mould), "zuppa di soffritto" (fried soup) and the "pasta ammiscata", a popular soup made by mixing up the leftovers of different kinds of pasta. Its seafood specialities are also great: "impepata di cozze" (spicy mussels), mixed seafood salads and a really vast selection of spaghetti served with various seafood sauces. Classical desserts include the "pastiera" (a cake made with sweet pastry and ricotta cheese) and the unique babà.
Today, Naples is a crowded and lively city, famous for its songs full of passion, coloured festivals, and folklore. Really interesting parts of the city are the Old Spacca Quarter (the heart of Old Naples) and the seaside Santa Lucia sector.

Overall Guide : There are so many lovely attractions (natural and cultural) in the charming city of Naples that there is sure to be something for everyone. If you love culture, here is a list of some (there is really a great... more number of them) of the wonderful museums of the city: the National Archaelogical Museum of Naples, the Museum of Capodimonte, the Museum Principe Aragona Pignatelli Cortes, the Museum Civico di Castel Nuovo (Maschio Angioino), the Museum Artistico industriale, the Museum Ferroviario Nazionale and the National Museum of San Martino. The fantastic Palazzo Reale, commissioned in 1600 by Spanish viceroys and finally completed in 1843, it has been the home of many great nobles, including the wealthy Charles III of Bourbon. On the first floor there are 30 rooms that can be viewed in all their grandeur. Since 1925, the palace has also been home to the National Library, which includes the vast Farnese collection brought to Naples by Charles of Bourbon, containing more than 2000 papyruses discovered at Herculaneum. Another impressive palace, surely a tourist must, is the elegant Monte di Pietà built at the beginning of the 16th century. Unforgettable will be a visit to the Underground Naples, a fascinating series of underground tunnels, passageways and stairs, leading into a series of halls and rooms.

Overall Guide : Naples is not to be seen but to be lived. I recommend going to Napoli Sotterranea (underground Naples) and seeing the alleys that hide many beauties. Don't miss the San Severo Chapel with the Veiled Christ and more. Go there... more and you won't regret it. Don't pay any attention to stereotypes.

Overall Guide : It's a magical city, it's impossible not to love it. To stay safe in Naples avoid wearing jewellery. Don't go there if you don't love chaos. The Neapolitans are very helpful and fun. In addition to all the art, don't... more miss the legendary pizza with pickle.

Overall Guide : Never rely on travel agencies, you can organise your trip much better by yourself. Visit the old town and especially the local markets ... it's really a lot of fun ... the specialities are pizza and Gragnano wine, cask wine... more which you can get buy from the cellar.

Overall Guide : Fantastic, according to me, it's unique, rich in history, art and culture that come together within a breathtaking backdrop. The longer you spend there, the less you want to leave it. Smells, tastes, traditions and hospitality make Naples a charming... more city.
IntroReviewListContainer-GetPartialView = 0,0156262