City Guide about Noto with tips and reviews by travelers. 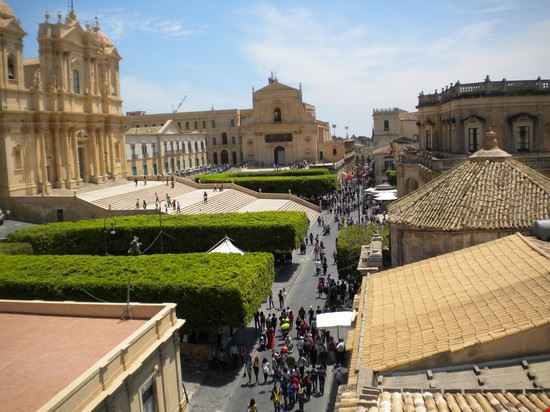 GuidePdfAppDownloadRow-GetPartialView = 0
Noto was once completely flattened by an earthquake that happened in 1693. However it was completely rebuilt by the nobility .Noto can be reached by train from Catania, changing at Syracuse. Other option is you can take the bus from the Via D’Amico terminal at the Catania airport. You can spend time wandering around the Corso, on its endless long roads, meandering towards the side streets, wandering in and out .Be sure not to miss the Via Nicolaci on the top of which is the beautiful elliptical frontage of the Chiesa di Montevirgine. Walking at the bottom of the street, strolling around the narrow streets, appreciating the golden hued stone buildings, the fantastical facades and balconies, will make you forget time. Here also stands the church of San Carlo, whose bell tower offers an excellent bird’s eye view of the surrounding landscape. Opposite the cathedral, the town hall has a lively trompe l'oeil ceiling in its Hall of Mirrors. The main street which is called Corso Vittorio Emanuele, runs through the grand gateway of Porta Reale along past the Chiesa di San Francesco (1704-1745), which sits on top of its long winding stairway, to the town's central piazza. Here the grand cathedral, the Duomo (1693-1770), faces the pretty Palazzo Ducezio (1746), which is now the seat of the Town Council. An admission fee of €1 admits you to one of the reception rooms inside, the Sala degli Specchi which translates as hall of mirrors. It is a palatial room with some interesting 19th Century frescoes. Noto is a historic center that is composed almost entirely of crumbling Baroque palaces, churches and houses. The three squares of attraction are Piazza Immacolata, Piazza Municipio, and Piazza XVI Maggio. Towards west on Corso Vittorio Emanuele, you'll come up to Piazza Immacolata. The square is dominated by the fine-looking facade of Chiesa di San Francesco all’ Immacolata, which contains noteworthy artworks rescued from a Franciscan church in the old town. The major work of art here is a painted wooden Madonna and Child from 1564, believed to be the work of Antonio Monachello. Straight away to the right of the church there is the Monastereo Del Santissimo Salvatore. The building is distinguished by windows adorned with potbellied wrought-iron balconies. The next square is Piazza Municipio, the most royal of the three squares. It's subjugated by the Palazzo Ducezio, an elegant town hall with curvilinear elements enclosed by a classical portico. The upper segment of this palace was added as late as the 1950s. Its most good-looking room is the Louis XI-style Hall of Representation, adorned with gold and stucco. On the vault is a Mazza fresco representing the legendary figure of Ducezio founding Noto. The last main square is Piazza XVI Maggio, subjugated by the convex facade of Chiesa di San Domenico, with two tiers of columns divided by a high cornice. The core is filled with polychrome marble altars. It is worth spending a day in this cultural city of Noto. Around Noto there are other sites to see as well, there are the public gardens immediately to the right of Porta Reale. These public gardens are filled with palm trees and flowering bougainvillea which make for a pleasant walk in the gardens. If you have your own vehicle it would be nice to include Noto Antica, the older, ruined town. There are more archaeological sites at Eloro and Palazzo Acreide which was formerly known as Akrai. Also within reach is Ragusa, another appealing Baroque town.