City Guide about Siracusa with tips and reviews by travelers. 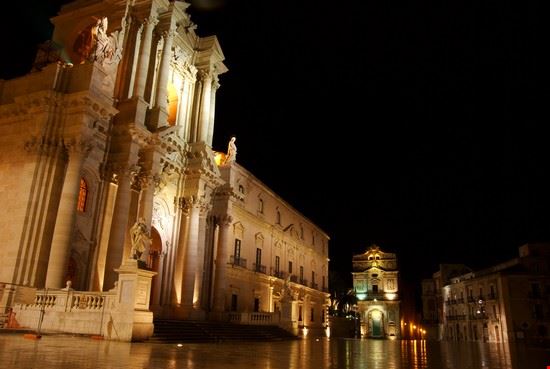 GuidePdfAppDownloadRow-GetPartialView = 0
Siracusa, or Syracuse, is located on the eastern coast of Sicily, a large island off the southern tip of Italy. This city of approximately 122,000 inhabitants is partly spread over Ortigya Island, just off its coast. Ortigya Island houses most of the remains of the ancient city, while mainland Siracusa is the modern part of the city.
Siracusa enjoys a warm climate almost throughout the year. The average summer temperatures are around 30°C while in winter it rarely goes below 10°C. While dry winds during summer keep the climate very dry, winter sees a fair amount of rain.
Siracusa is an ancient settlement existing for more than 2,500 years. For a large part of its early existence, the city was ruled by Greeks; the effect of which can be seen even today.

Overall Guide : Ortigya Island houses most of the ornate medieval structures of the region. The Duomo of Syracuse is a blend of various styles over the centuries; it reflects features from the ancient Greek temple style to the baroque style which was... more popular in the medieval times. Piazza del Duomo is flanked by several grand structures like the Palazzo del Senato and the church of Santa Lucia, among others. The main square of the old city, Piazza Archimede, houses an elaborate fountain as well as the remains of some gothic structures. The Archaeological Park on the Siracusa mainland is where most of the ancient structures of the region are found; the Roman Amphitheatre and the Greek Theatre stand out. The Paolo Orsi Regional Archaeological Museum displays a comprehensive collection of relics from ancient times. Castello Eurialo, a little away from Siracusa, is one of the most impressive fortresses built by the Greeks when they occupied this region.

Overall Guide : Welcome to Siracusa a beautiful city in Sicily State in Italy. Also known as Sicilian in Italian and the state Sarausa in Latin. I was astonished to see the incredible historical architecture. The buildings were huge and had a pinch... more of the ancient time. I saw that the city had several restaurants serving different kind of cuisines. I saw many art galleries displaying the Greek history of this city. This place had modern modes of transport like buses and trains. Most of the tourists prefer travelling by trains since it takes you to the entire site seeing of the city. I saw a lot of temples, traditional people still believe that god would appear some day from the temple. I visited a beautiful castle which was very well maintained. The museums had a beautiful antique collection that I was very much surprised that it still existed in today’s world. The place is perfect for people who want to explore.
Not to be missed Temple of Apollo , Castello Maniace , Archaeological Museum
IntroReviewListContainer-GetPartialView = 0
AdvValica-GetPartialView = 0
AdvValica-GetPartialView = 0