City Guide about Catania with tips and reviews by travelers. 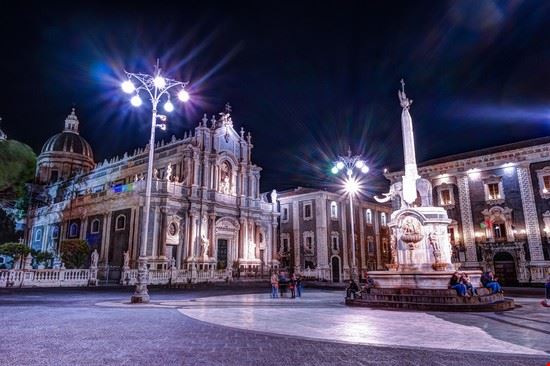 GuidePdfAppDownloadRow-GetPartialView = 0
Catania, capital of the province of Catania, is located on the east coast of the island of Sicily, Italy. Located at the foot of volcanic Mount Etna, Catania is Sicily’s second largest city. With a population of around 306,000 inhabitants, the city has the second highest population density on the island.
The best time to visit this city is between the months of June and August, when the climate is cool and pleasant and highly favourable for outdoor activities.
Founded by the Sicels, the area was conquered by the Romans; soon Catania became the most prosperous Sicilian city. During the middle ages, the area served as an important port.
Fishing and agriculture are important occupations practiced in Catania. Tourism is also an important money-earning sector.

Overall Guide : Home to several important monuments and archaeological sites that are of great historical significance, Catania houses a number of popular attractions including the Piazza Doumo, Castel Ursino and Catania’s Cathedral. The Bellini Gardens, another popular tourist site, is an ideal... more place for relaxing, walking and other outdoor activities. The gardens contain several avenues, fountains, bridges, statues and borders.   The Church of San Giuliano and the Biscari Museum are other popular historical structures. The city also houses a number of discos, pubs, restaurants and hotels that guarantee a unique nightlife experience. The city, with its rich culture and history, celebrates a number of annual events and festivals, some of the popular ones being the Sicilian Event of Ethnic Music and Contamination and the Sant’ Agata Festival.

Overall Guide : Seriouly poor tourist information. Even tourist guide books, in various language, are unavailable in tabbachis / bookstores. Do you want tourists The lack of exchange/cambio facilicties is disgraceful. What are your Banks for? Do they want business. Go anywhere else... more in the world and you can change money without too much a problem. Cantania Banks still live in the financial dark ages. Get it fixed. You reallly need a tourist supremo to organise things.
Not to be missed Il Duomo
IntroReviewListContainer-GetPartialView = 0,0156254
AdvValica-GetPartialView = 0
AdvValica-GetPartialView = 0