City Guide about Riva del Garda with tips and reviews by travelers. 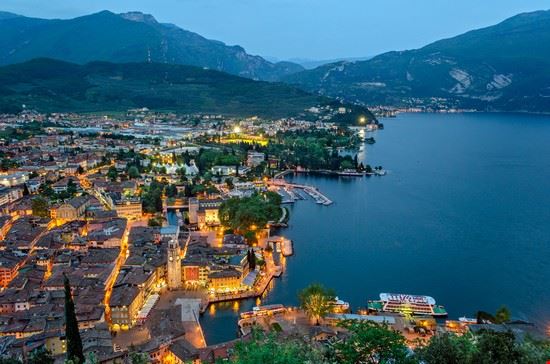 GuidePdfAppDownloadRow-GetPartialView = 0
Riva del Garda can be described as a town located in Trento Province, Italy.
Riva del Garda lies at Lake Garda’s northwestern corner. Winters seem to be sunny, moderately cold with certain quantity of snow. Summers appear to be warm. However, they are occasionally sultry or hot; with scattered night thunderstorms and windy afternoons.
Riva del Garda thrives mainly on tourism. However, it also houses industrial activities like paper manufacturing.
Riva del Garda principally belonged to ‘Republic of Venice’. Later, it was captured by Austro-Hungarian Empire and remained in its hands till the year 1918. Thereafter, this place has remained a portion of Italy.
With 2 of its harbors, Riva del Garda has been well equipped for windsurfing and sailing. Rock climbing has also been practiced. Basketball is possibly the major sport of town. There is a team ‘Virtus Riva’, in ‘C1’ division.

Overall Guide : Riva del Garda is a best place for natural sightseeing. City is close to nature and has lot of things to do. It’s a best place for photographers as there are lots of scenic sites. You can enjoy boating on... more lakes surrounded by hills. You can come here to enjoy with family as it looks musical. There are lots of historical bridges which are not in a condition to walk but you can enjoy the art though. With lot of open space throughout the banks, it’s a good place for kids to play and enjoy. “The Bastion” is another historic site where you can enjoy hiking. It’s about 20 to 30 min’s of walk and it is worth. You can nearly see the entire view of ‘Riva del Garda’ from “The Bastion”. “Museum of Riva del Garda” is another attraction and has a collection of rate photographs from 20th century.
Not to be missed Kapuziner am See , Kapuziner am See , Arco Castle
IntroReviewListContainer-GetPartialView = 0,0156245
AdvValica-GetPartialView = 0
AdvValica-GetPartialView = 0