City Guide about Salsomaggiore Terme with tips and reviews by travelers. 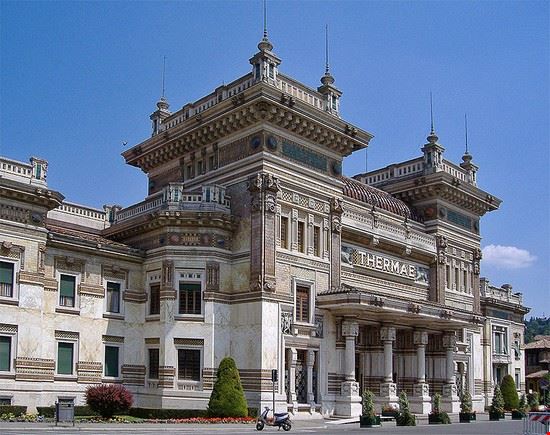 GuidePdfAppDownloadRow-GetPartialView = 0,0156235
The village of Salsomaggiore Terme known as thermal spa city is located in a green haven around 30 minutes away from Parma, one of the most important cities of the region of Emilia-Romagna. Famous since Roman times for healing properties of its river waters one of the most salty sea waters in Italy. This is one of the major reasons why tourists gather in this city in huge amount… the thermal baths of Salsomaggiore with an exceptional density of salt are famous for their health-inducing properties and for the charm of the Terme Berzieri, the magnificent Liberty style spa constructed here in the early 1900's. In addition to its famous thermal waters there are gardens for children. There is an ancient 13 century tower known as Antica Torre over a mountain crest which is little ahead of the town area. We reached there by relishing the breath taking view of green countryside. There is a story behind making of tower it was built to protect the subterranean vault where salt was prepared by monks using waters of river flowing in the countryside….it was an important commodity of that time. Last but not the least we visited the magnificent castle of Scorpions from the Marquises Pallavicino which is surrounded by an ancient village at the Emilia Romagna region away from the city area. I forgot to mention the shopping area known as Central piazza which is located at the main centre of the town offers variety of clothing and furnishing products.