City Guide about Ayutthaya with tips and reviews by travelers. 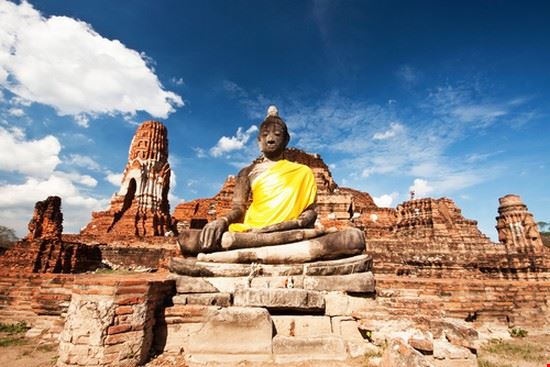 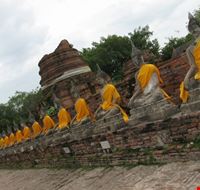 GuidePdfAppDownloadRow-GetPartialView = 0
The historic city of Ayutthaya is an ancient, yet modern, city on an island in the Central Plains of Thailand. It is the capital city of the Ayutthaya province and is around 90 km from Bangkok. It lies at the junction of the Chao Phraya, Lopburi and Pa Sak Rivers.
With a population of more than 75,000 people, the city experiences temperatures ranging from approximately 20°C–37°C; November–February is considered as the best time to visit.
Ayutthaya was destroyed in 1767 by the Burmese army, but its ruins still remain at the Ayutthaya Historical Park, with the modern town being set among the ruins. The city was declared a UNESCO World Heritage Site in 1991.
The cheapest and most scenic way to get to Ayutthaya is by train. However, minibuses and regular coaches from Bangkok are also available.

Overall Guide : Ayutthaya’s attractions have fascinating architectural styles ranging from early Sukhothai to Khmer designs. This is reflected in the Wat Phra Si Sanphet, which is the city’s largest temple and has a row of chedis (Thai stupas). The large bronze image... more of Buddha at the Viharn Phra Mongkol Bopit is worth a visit. Saffron-robed images of Buddha and golden-clothed chedis are equally fascinating at the stunning Wat Yai Chaimongkon. The city’s largest bronze Buddha statue, adorned in full royal garments, is at the Wat Nah Phra Meru. The Wat Phra Mahathat has a Buddha head surrounded by a tree. This Wat also has rows of headless Buddhas. The Chao Sam Phrya Museum or the Chandra Kasem Palace Museum (housing Thai Buddhist art) is another must-visit. Other attractions include the Monument of King Naresuan The Great, which is a large bronze image of the ruler atop a horse, and the picturesque Wat Phu Khao Thong.
IntroReviewListContainer-GetPartialView = 0

7
Temple of the Royal Restoration