City Guide about Orlando with tips and reviews by travelers. 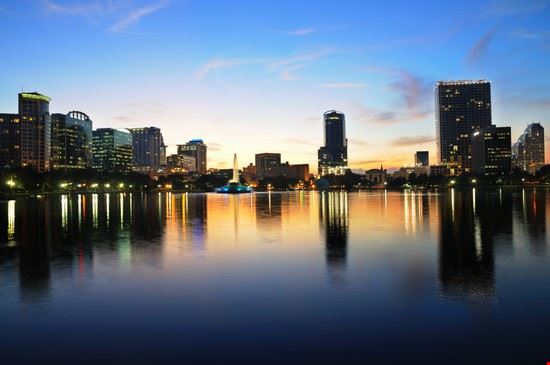 GuidePdfAppDownloadRow-GetPartialView = 0
The city of Orlando is situated in Florida, United States. It is nicknamed ‘The City Beautiful’ and receives almost 52 million tourists annually. With a population of over 200,000 inhabitants, it is the sixth largest city in Florida.
Orlando has a subtropical climate, which is mostly warm and humid throughout the year. Summers are hot with considerable rainfall, while winters are moderate and dry. Low elevation is the primary reason behind the city’s warm climate. Hurricanes are also common here.
Orlando is one of the most growth-oriented cities in the United States. The most important chapter in Orlando’s economy was the opening of Walt Disney World in 1971. Today, a large part of Orlando’s economy is involved in the tourism industry.

Overall Guide : Orlando offers its visitors a regaling time with outdoor activities such as hiking, cycling, canoeing and swimming as well as some great places to visit. Discovery Cove is an innovative attraction with private beaches and plush hotels. It is limited to... more only a thousand guests a day, making it an elite spot. Walt Disney World is the greatest attraction in Orlando with four main parks, namely Magic Kingdom, Epcot, Disney-MGM Studios and Animal Kingdom. This place also houses water parks, numerous hotels and shopping arenas as well as a police force. It is the world’s biggest amusement resort attracting over twenty million visitors annually. The Orlando Museum of Art displays a huge collection of modern art highlighting the pre-Columbian pieces. The Silver Spurs Rodeo puts on a fine show every year with some of the top rodeo athletes in Orlando. It draws more than fifty thousand spectators for its sheer energy.

Overall Guide : Go to the various amusement parks and make a detour to the various beaches, they're no more than an hour's drive away, for example, Daytona etc.. A treat for those who love the esoteric &co: go to Cassadaga, it feels... more as though it's a 'world away'. Don't miss 'Church Street Station' in downtown Orlando for a journey into the past!

Overall Guide : A great place for families especially those with young kids. Something for everyone to do no matter what your situation is. Places to go & things to do no matter what time of the day or night it is!
Not to be missed Universal Studios , Disney World , SeaWorld Florida

Overall Guide : It's the perfect city for lovers of theme parks that are as good as only the Americans know how to make them! Definitely don't leave out Disney World, Universal Studios and the new Wizarding World of Harry Potter and Sea... more World.

Overall Guide : Enjoyable theme parks, great shopping, barely any traffic and great for those who wish to go out of town for relaxation, comfort and/or for a family vacation
Not to be missed Epcot Center , Walt Disney World , Disney World

Overall Guide : Orlando is a versitile location to travel to for vacations! Orlando has accommodations for children and adults. Day or night is exciting.

Overall Guide : Everything is expensive